In what will soon be one year ago exactly, my flatmate Kate and I booked to fly out to see our other flatmate Carolyn out in Singapore. Hailing from Scotland originally, Carolyn has lived out there for almost a full Chinese zodiac calendar as an ex-pat kid and now attends university at Stirling. She still flies out in holidays to see her family and Stirling's semester system being what it is meant we all had a month to kill after Christmas, and I can safely say we put that month to good use. 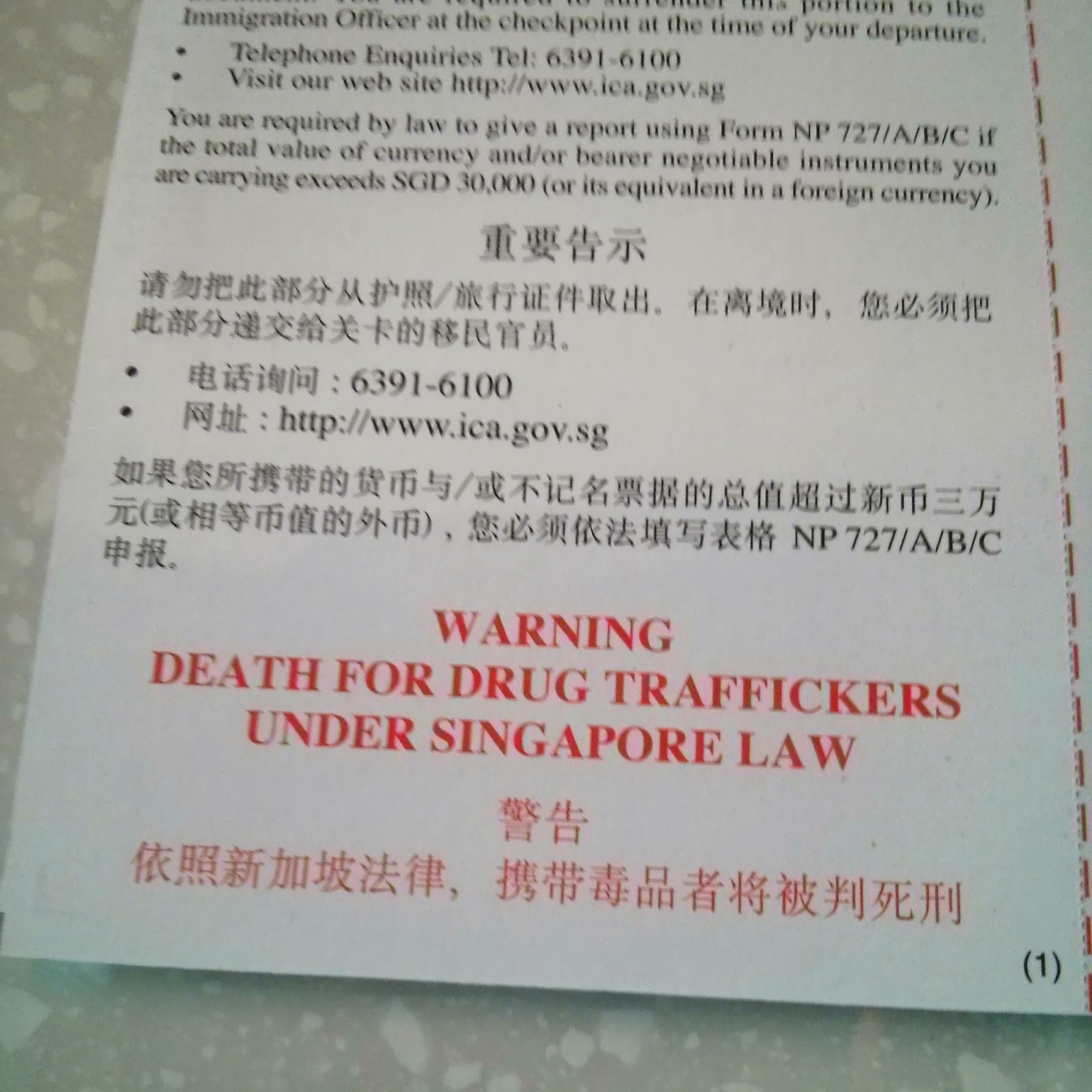 Day One - All The Pretty Lights

Left Gatwick at a reasonable time and 22 hours, three films and one uncomfortable sleep later, we arrived in Changi Airport (at precisely the same time as another A330 from Australia got in so immigration was packed). We filled in our visa cards (which politely reminded us we'd be killed if we trafficked drugs, as you can see above) and had our passports checked and stamped. Visa stamps are the one thing I miss the most when travelling around the EU so it's a big deal to me that I got four stamps for this trip!

The second we stepped outside the airport's air conditioning, we were hit with the heat. The only comparison I have is the inside of the temperate house in Kew Gardens, to the point that I think if I visit there again it will bring back memories of this trip. While the temperature was pleasant and reminded me a lot of Southern California or Naples, I knew the humidity was the part I was going to have to get used to. It's really stifling when you're not used to it, and particularly when you're in a long sleeved top and jogging bottoms.

I remember being excited just to see that the trees were different to what I was used to - big, rich leafy structures forming umbrellas over the roads. We took the long way back to Carolyn's condo, via the marina, and I saw all the landmarks I recognised from my eager googling during the weeks before we left. Our detour ended up becoming a traffic jam but I got a brief look at the giant horse that had been erected in Chinatown for the lunar new year, the astonishing height of buildings and the blatant flaunting of health and safety for workers building new skyscrapers. 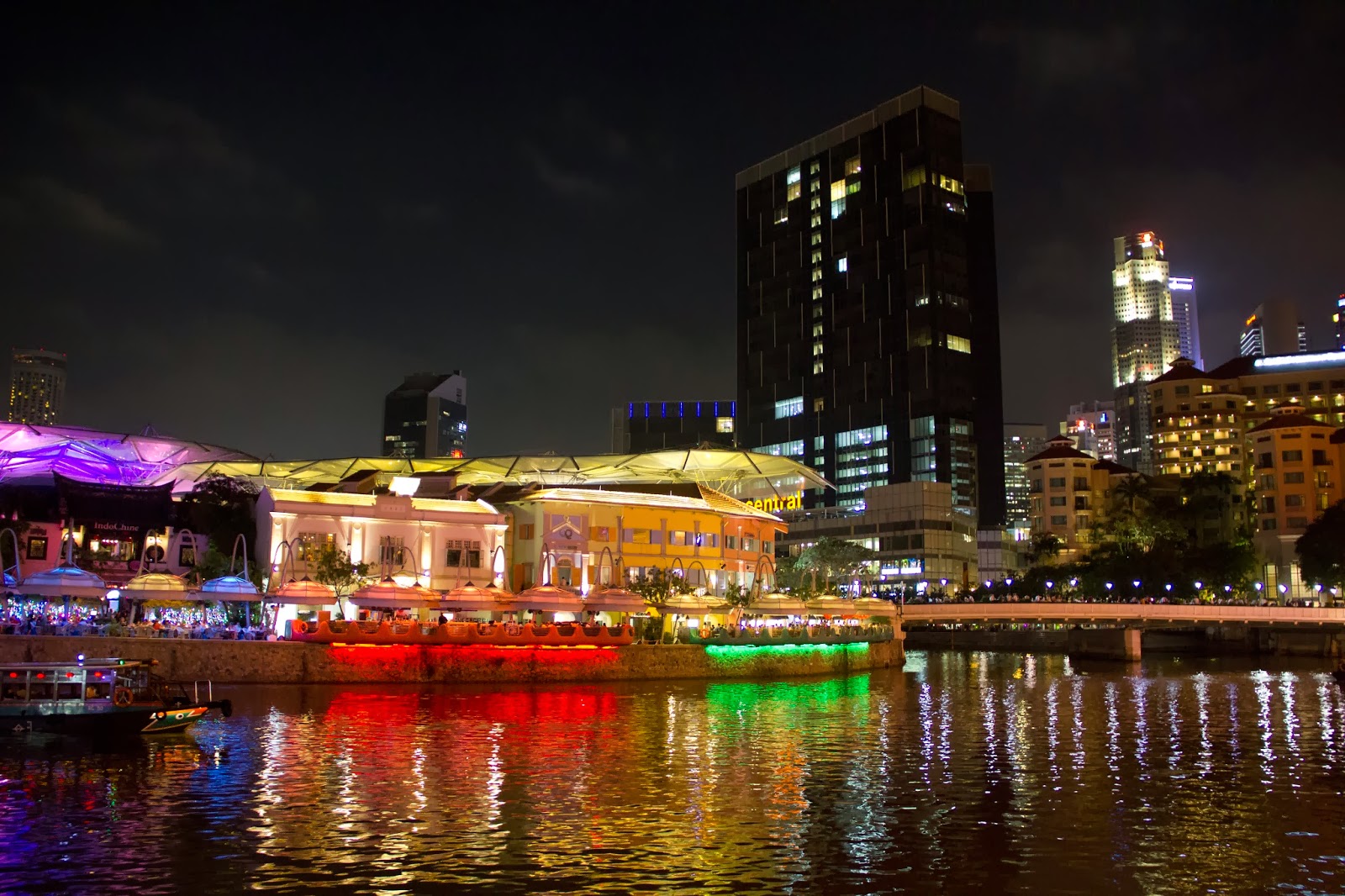 We got our first taste of Singapore's 'benign' dictatorship that evening when we went out to Brewerkz at Clarke Quay, described by Carolyn as "like the Allanwater but not really". To her credit, they do brew their own beer and have a lot of random paraphernalia on the walls, though I can't imagine anyone voluntarily sitting outside to enjoy the 'heat' back in Scotland.

Despite my crushing fatigue, I could make out how comfortably clean the streets were. Massive fines are doled out for dropping litter so the streets are missing the usual gum splats and discarded coke bottles present on Britain's roads. The quay itself feels similar to what would be if London's Westfield was plonked down right beside Embankment. It's a lively place with lots of shops, bars, restaurants, a river taxi service and even a reverse bungee jump and a giant swing ride.

Afterwards, we passed over Read Bridge and it became very apparent that all the students hang out there. There was not a single free space which would allow you to see the Singapore River for all the people and cans of beer (but no litter, remember)! It was pre-drinking on a level the UK doesn't even know exists, but thanks to the dictatorship, is extremely safe.


We came to another point on the river and watched a bit of the laser show from Marina Bay Sands Hotel and then watched a young couple scream in the excessively high swing ride before heading back to the condo. I was asleep before I even hit the pillow. 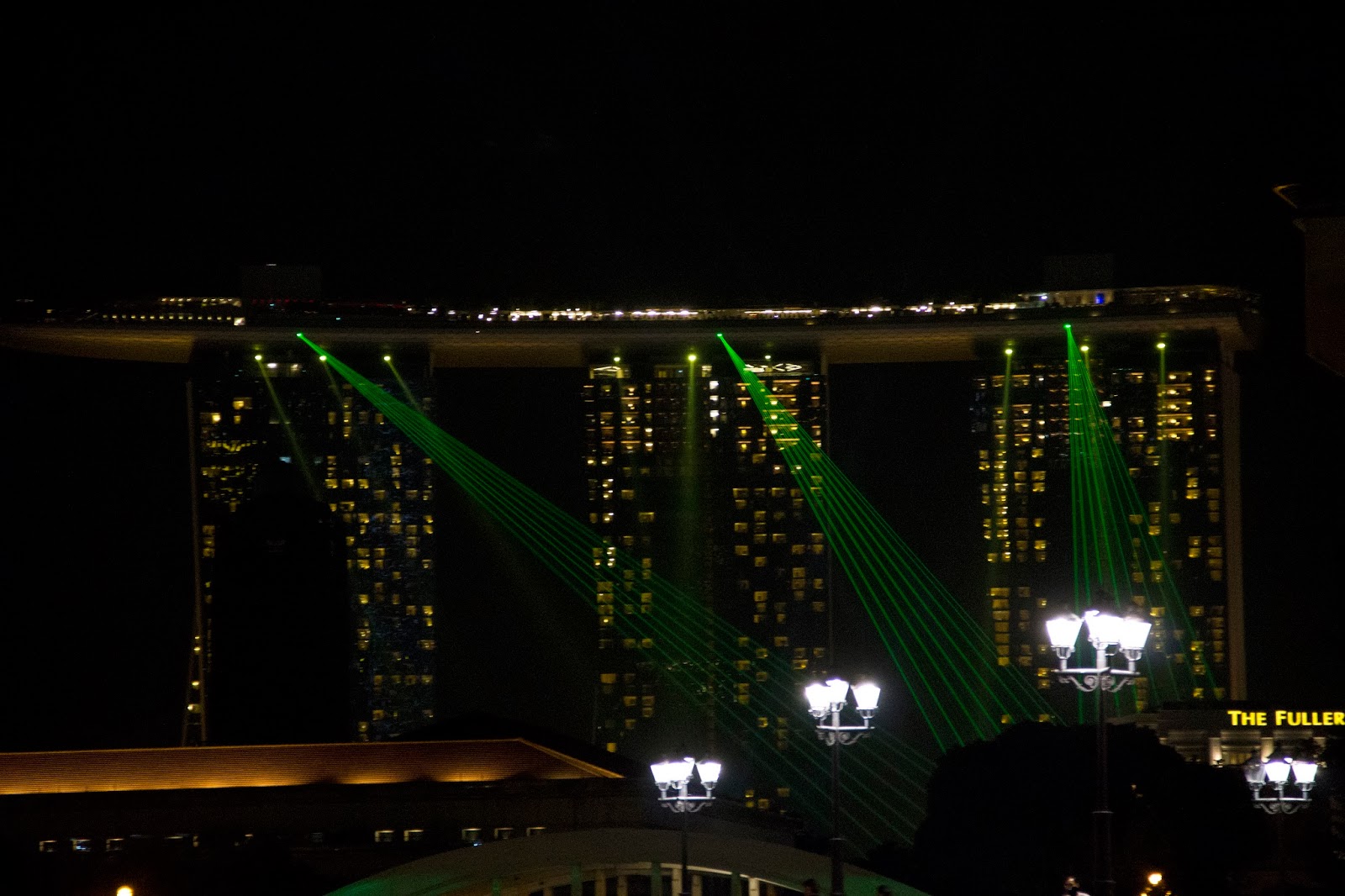 
Waking just once during the night, jet lag had me up and bustling about at around 7am so we made a plan to head to Singapore's Botanic Gardens for breakfast. Everyone seems to drive everywhere in Singapore, and all cars are fitted with a little top-up card reader for parking that every car park on the island reads. It's a genius invention and one I really think needs to head to Europe some time soon.

When we arrived at the gardens, my mind immediately sprang to Jurassic Park and I was half waiting for a brachiosaurus to stick its head out from behind the palm trees ("Merry belated Christmas, Emma! It's your dream come true!")... Unfortunately, that didn't happen. 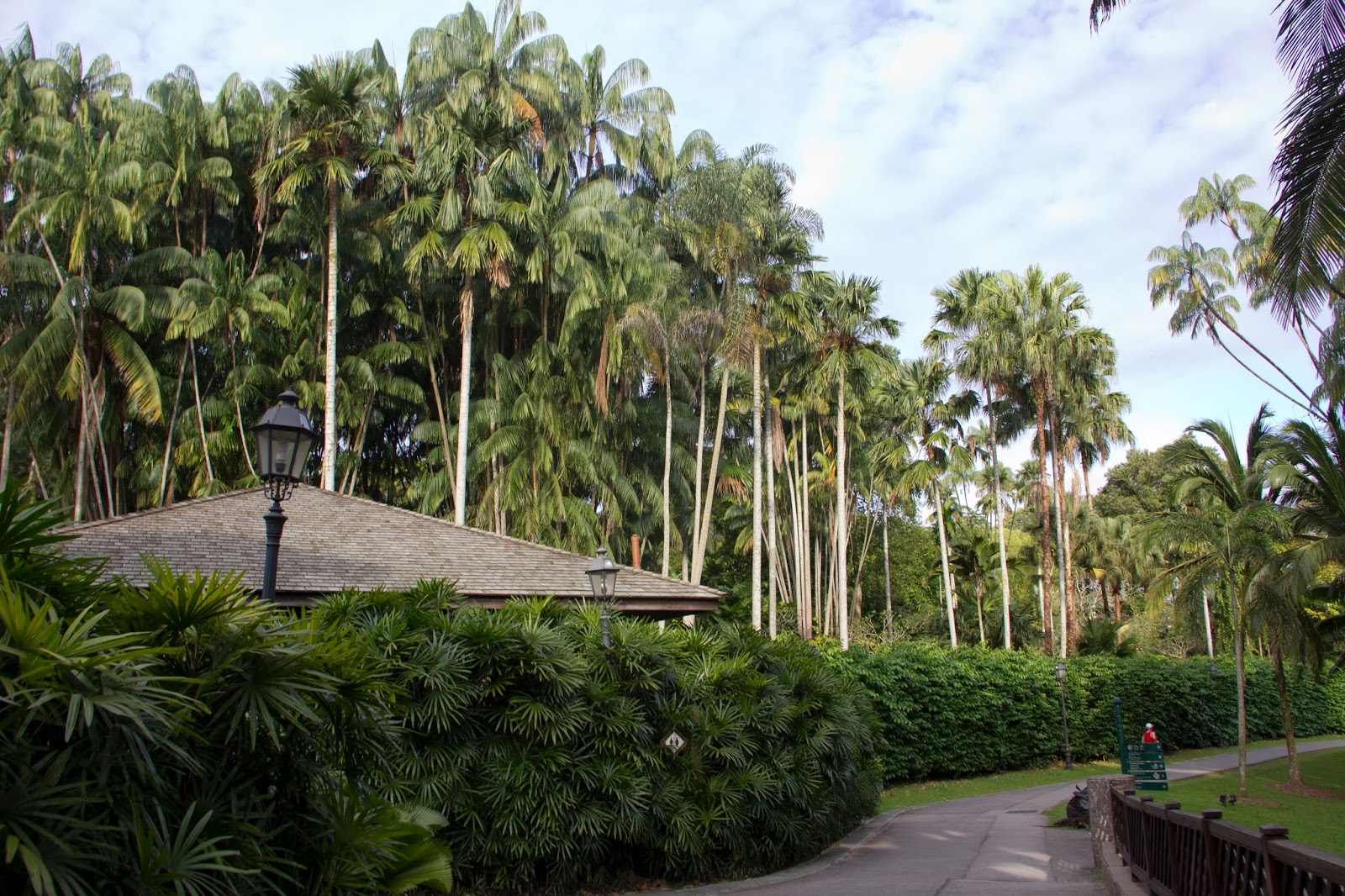 We ate our breakfast overlooking a group doing t'ai chi with swords and people-watched locals with big fluffy dogs having serious trouble in the heat (seriously, I lost count of how many long-haired snow dogs I saw when I was out there). I tried lime juice for the first time at breakfast - not the concentrated stuff you're probably thinking of but a more diluted sugary drink. It was the equivalent of having lemonade for breakfast and I miss it so much now I'm back in England.

We took a walk through the grounds, passing under tall trees to swoop around a murky lake that was home to terrapins and koi fish. We saw a group of girls in traditional dress being photographed, a sleepy cat and a pair of chickens carefully roaming a wide grassy knoll. 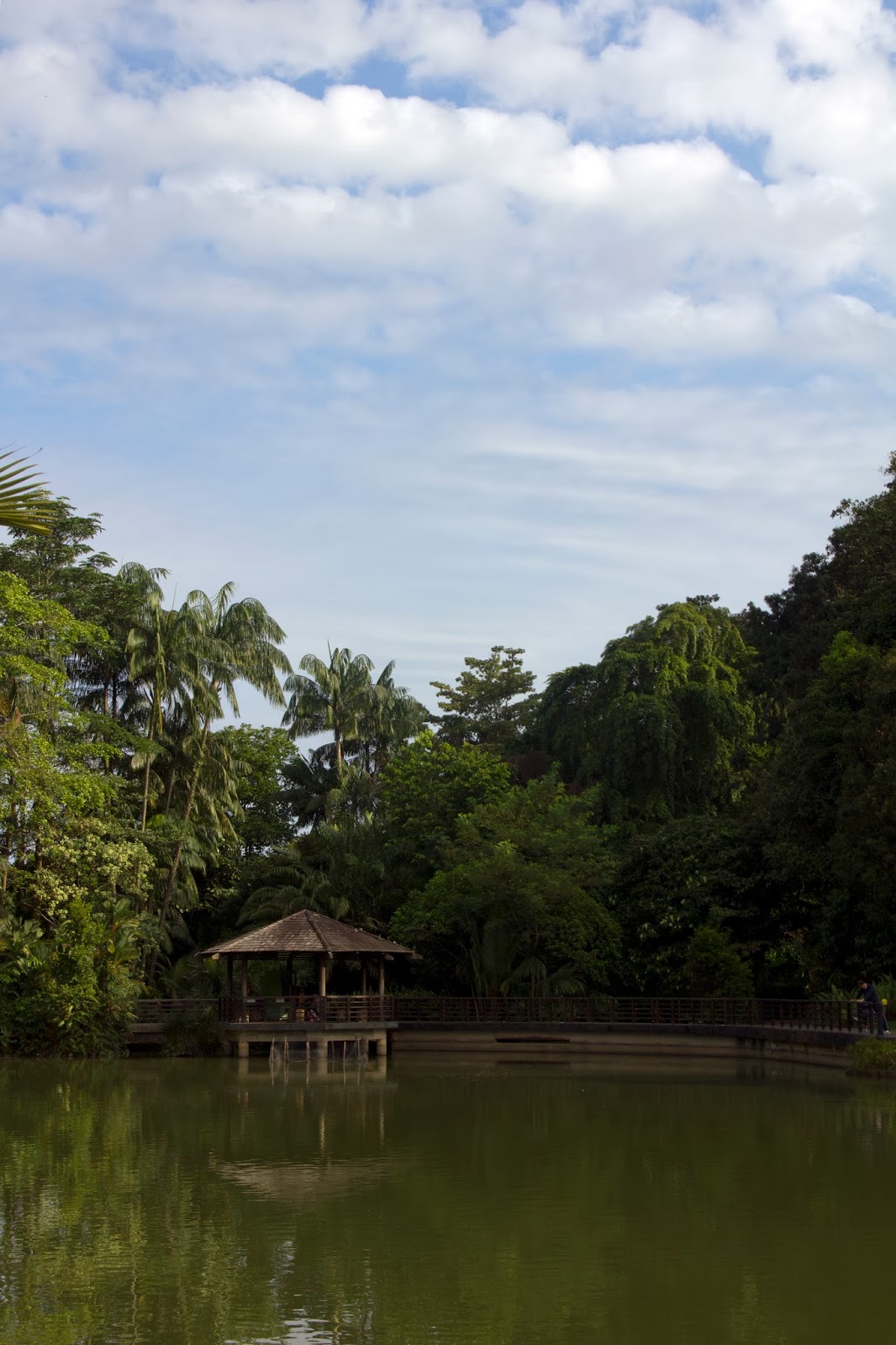 For lunch, we headed out to one of Singapore's countless malls and stopped for sushi before exchanging our pounds to Singaporean dollars and grabbing an iced drink. The rest of the afternoon was spent lounging beside the pool before we went out to an open air hawker centre and bought dinner from one of the many stalls.

Food in Singapore seems to be either ridiculously expensive or stupidly cheap, and these food courts are ridiculously cheap. I paid roughly £3 for chicken, heaps of rice, soup, salad and watermelon and another £3 for 660ml of beer (probably the cheapest you'll find in Singapore). As if the extremely low price wasn't enough, the food was delicious. Did happen to see my first (and thankfully only) cockroach of the trip just at the junction of the toilets and the arch leading to outside, which made me feel a tad squicky. Hawkers used to be extremely unclean but have since been policed and sorted by the government. Sadly, the cockroach wasn't the only creepy bug I was to encounter this month. Bali was, as anticipated, rife with them. 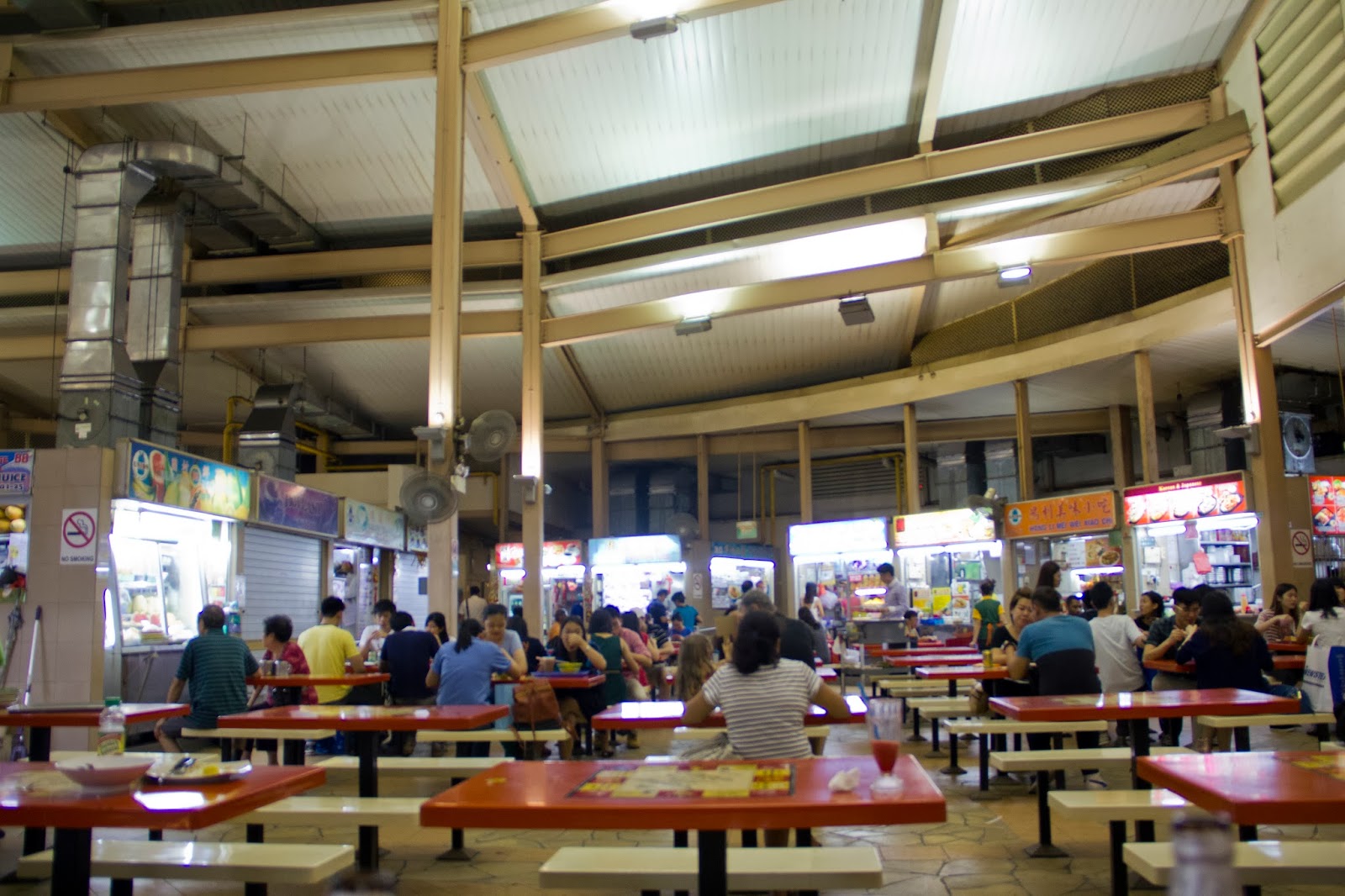 After a quick breakfast, we headed down to Lower Peirce Reservoir to see the view but mainly to see the cute little macaque monkeys! Singapore used to have no drinking water of its own and had to import all its water up from Malaysia until several reservoirs were built in the centre of the island. It's safe to drink but definitely heavily treated, much like London's water. 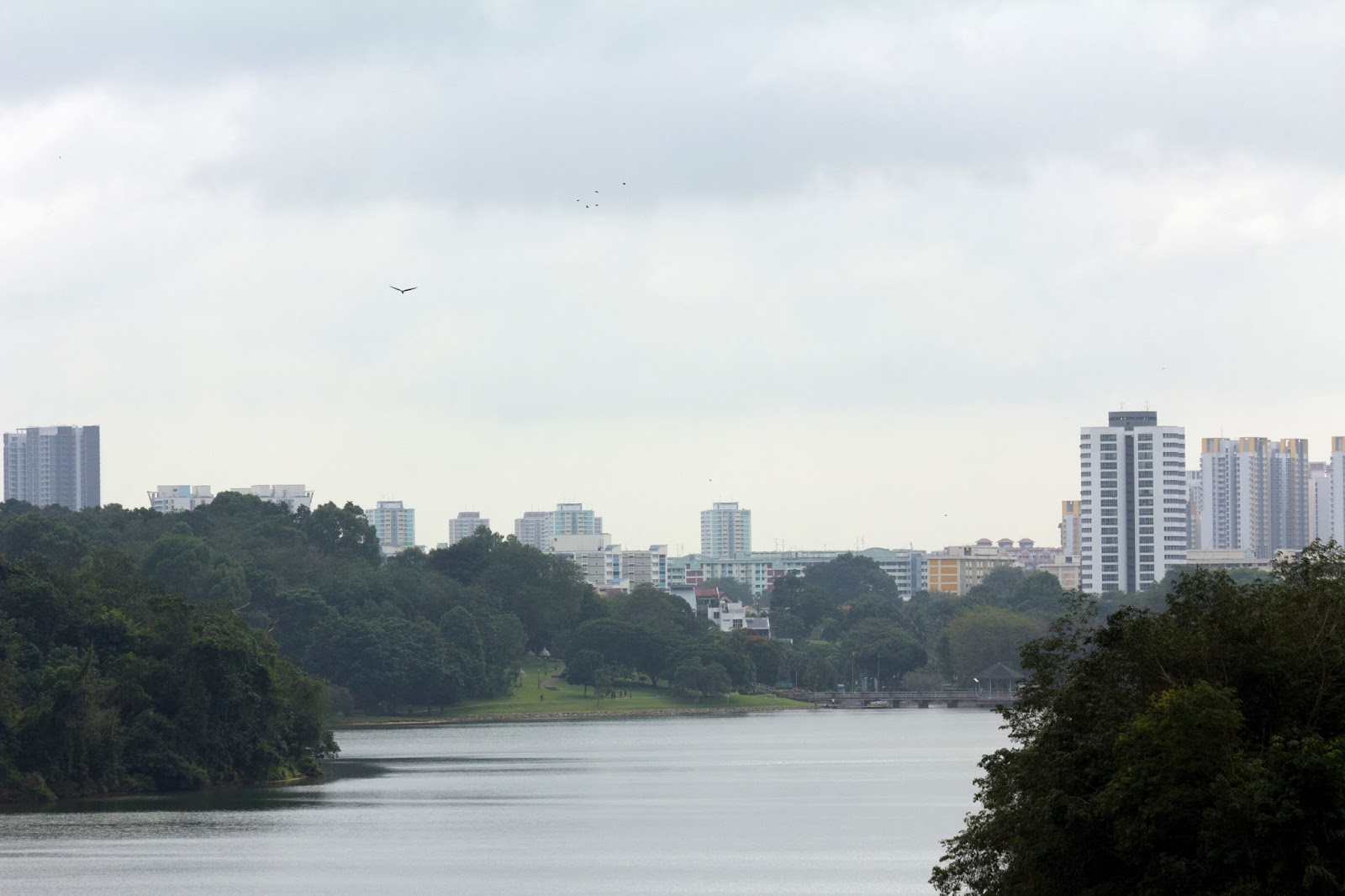 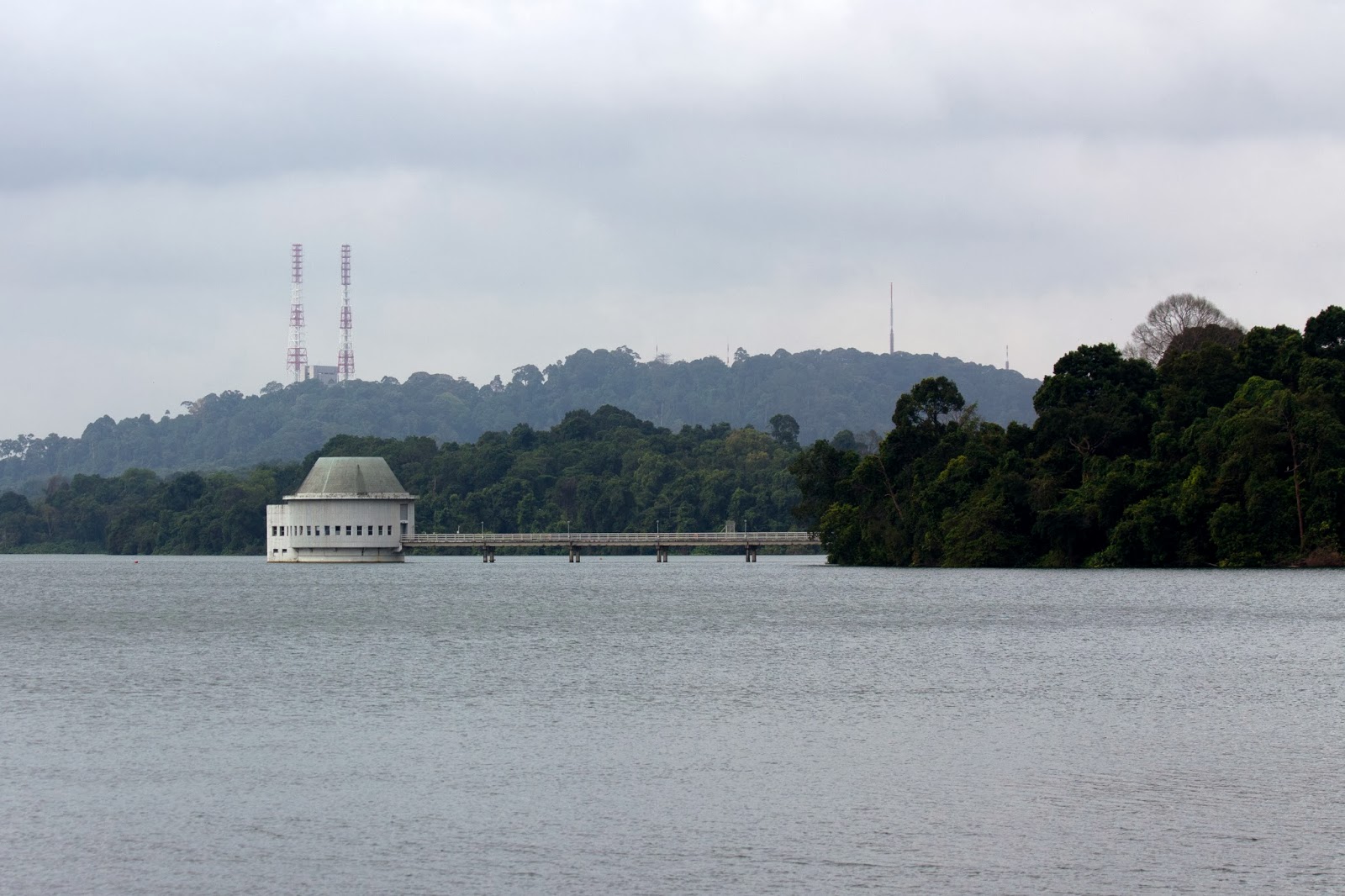 The reservoir is probably on one of the few hills in Singapore, but it meant we got a nice view of the forest meeting the city. The military use the forest for training, so we also saw several signs warning of live firearm practice, just next to the sign that begged visitors to "please stop feeding the monkeys".

I can understand why people fed them, though. They're pretty cute. Due to being fed, they've become very accustomed to humans and have been known to leave the confines of the forest and raid houses! As a result, most ground floor houses near the reservoir have bars over their windows to stop monkeys raiding the pantries. 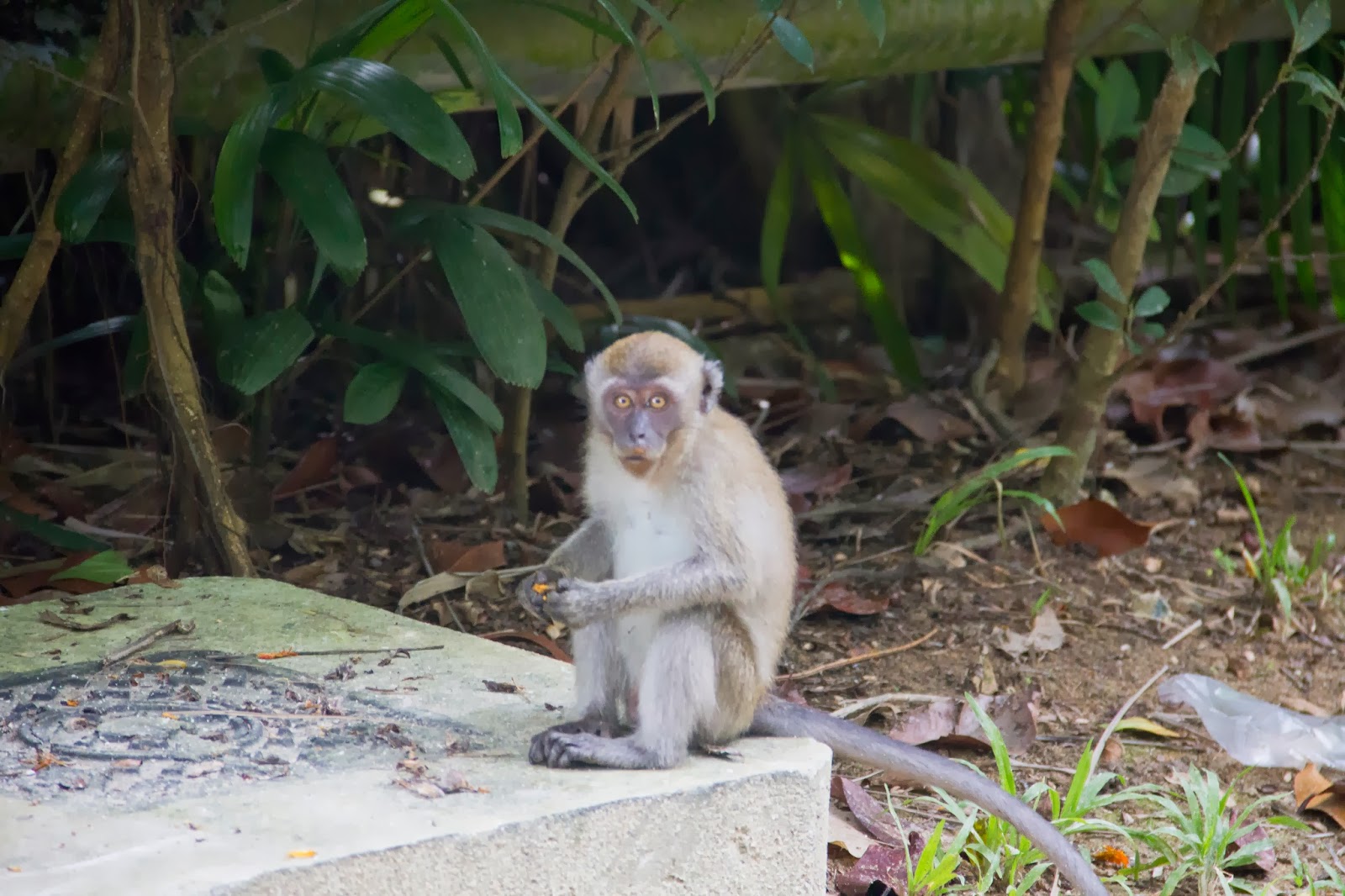 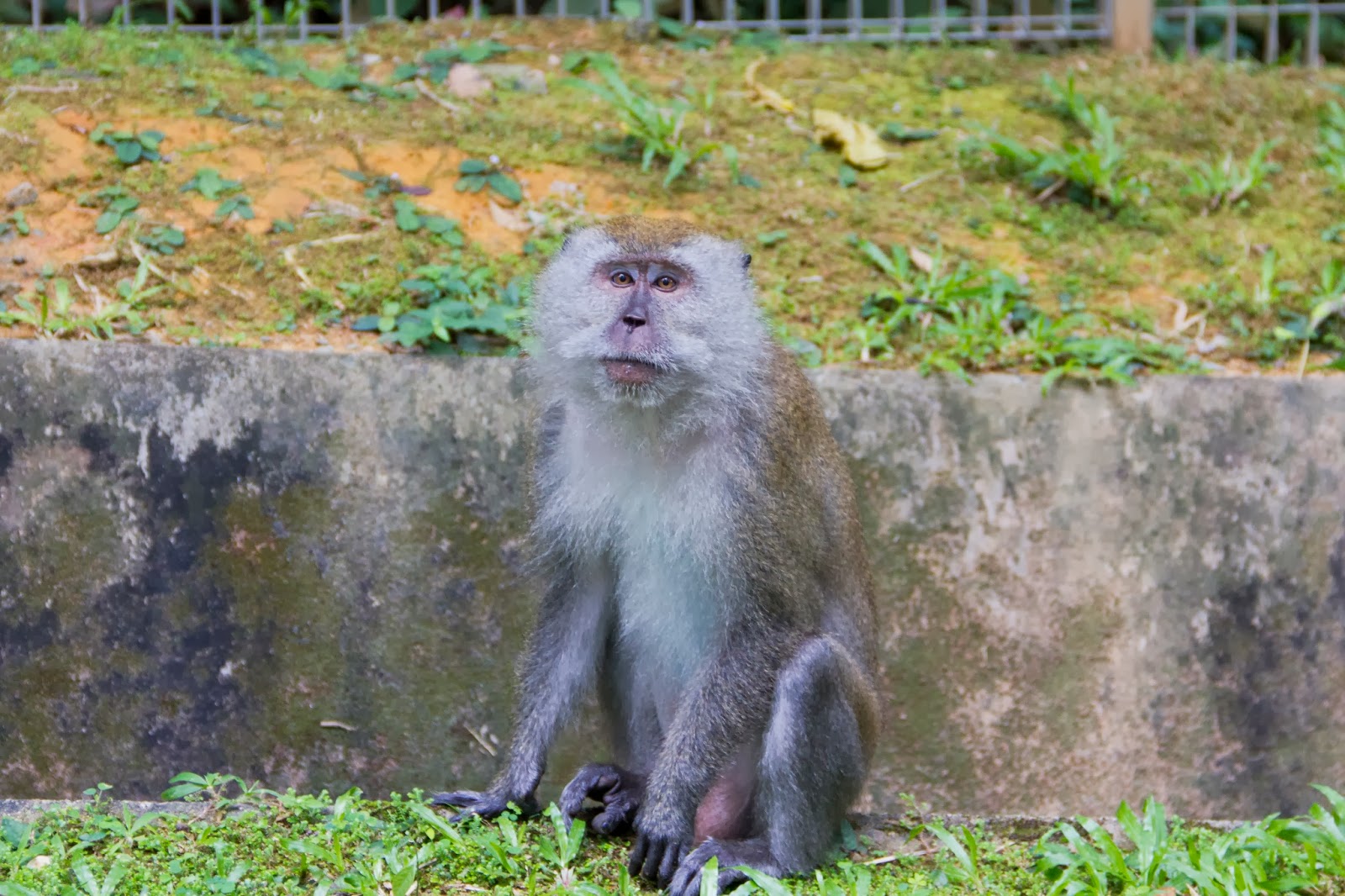 Lunch found us in a restaurant called Dôme in what used to be the British barracks. The place had a very outdoor American mall feel to it but the buildings were all original from when Singapore was a colony. It felt very counterintuitive to be eating out all the time but it is cheaper or about even to eat out in Singapore than it is to buy food in and make your own food.

We moved on towards Sentosa, the resort island just south of Singapore itself. Driving over a long bridge to get to the island, we saw enormous (and I mean staggeringly huge) metal structures. I think they may have been cranes for the crate shipments that Singapore's industry thrives on, and I quite enjoyed seeing them alongside the road, but apparently they'll be gone within five to ten years due to leisure development.

Sentosa wasn't always a tourist trap and was once (and sometimes still is) known as "So Expensive and Nothing to See Actually", but a lot of development went into shaping it into the island it is today. It's home to Universal Studios, S.E.A Aquarium, a casino, luge rides, beaches, a 37 metre tall merlion and the obligatory host of bars and restaurants. A stone's throw from the tourists, there's the Singaporean equivalent of Beverly Hills so quite a few pricey restaurants have cropped up as well. 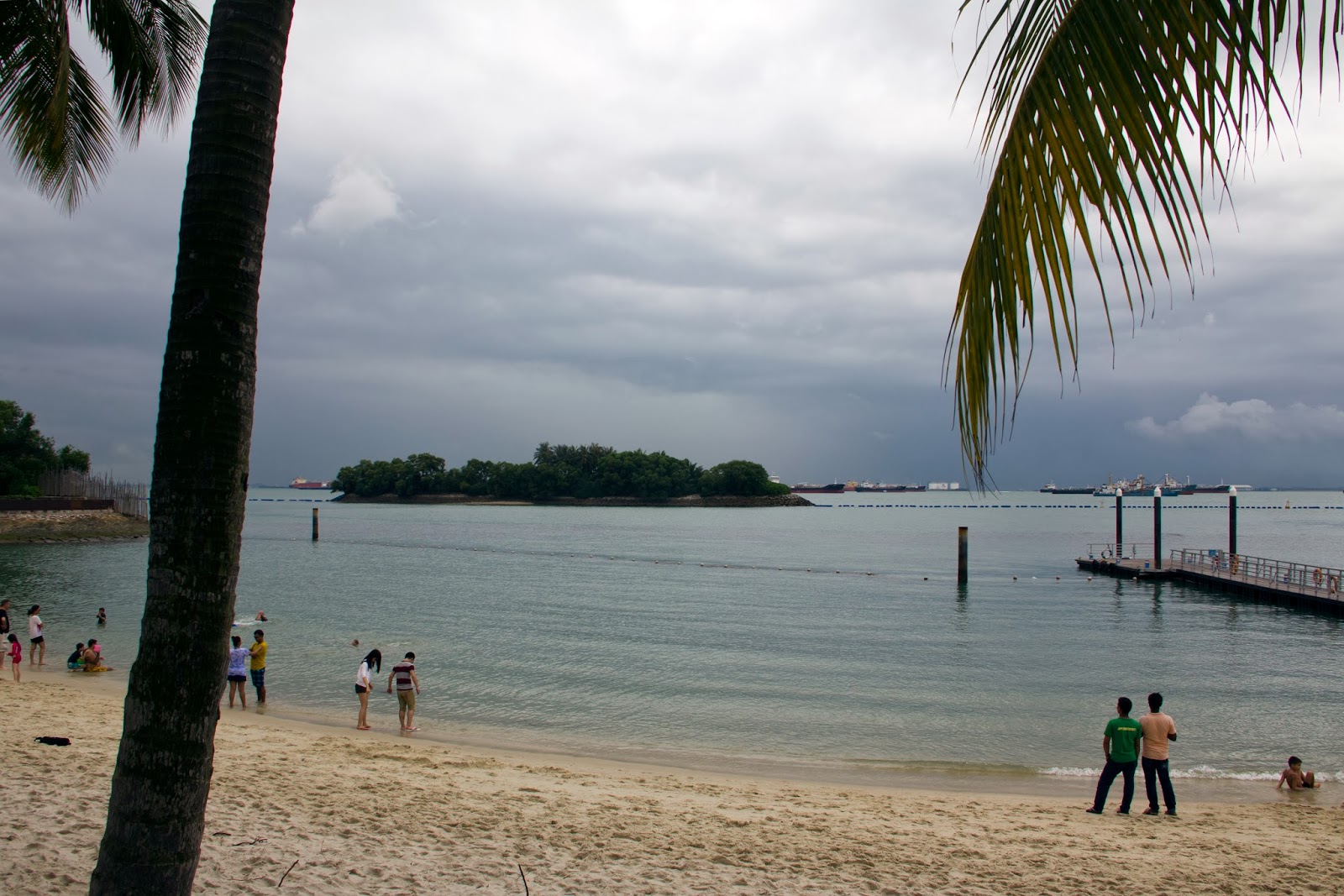 We however sat overlooking a beautiful view of turquoise sea, white sand and a lush, green island, marred only by the ludicrous number of children playing in the water and the hulking great cargo ships in the distance, again reminding me how industrial Singapore is. I ordered my first Singapore Sling which was fruity but pretty strong and possibly not the best idea to have half way through the day while you're still battling jet lag. I'm glad I can say I've had one in Singapore, though.

We moved round to Sentosa Cove to a bar that was doing buy one get, one free on beer and cocktails. Suffice to say, I was falling asleep in my second pint of Tiger despite the incredible view of the harbour. I had a long nap once we got back to the condo and by the time I woke up we were going to leave for dinner! It was another hawker centre, where we had chicken rice, a spicy thin kind of pancake, leafy green vegetables and the most incredible sweet and sour chicken I think I've had in my life. 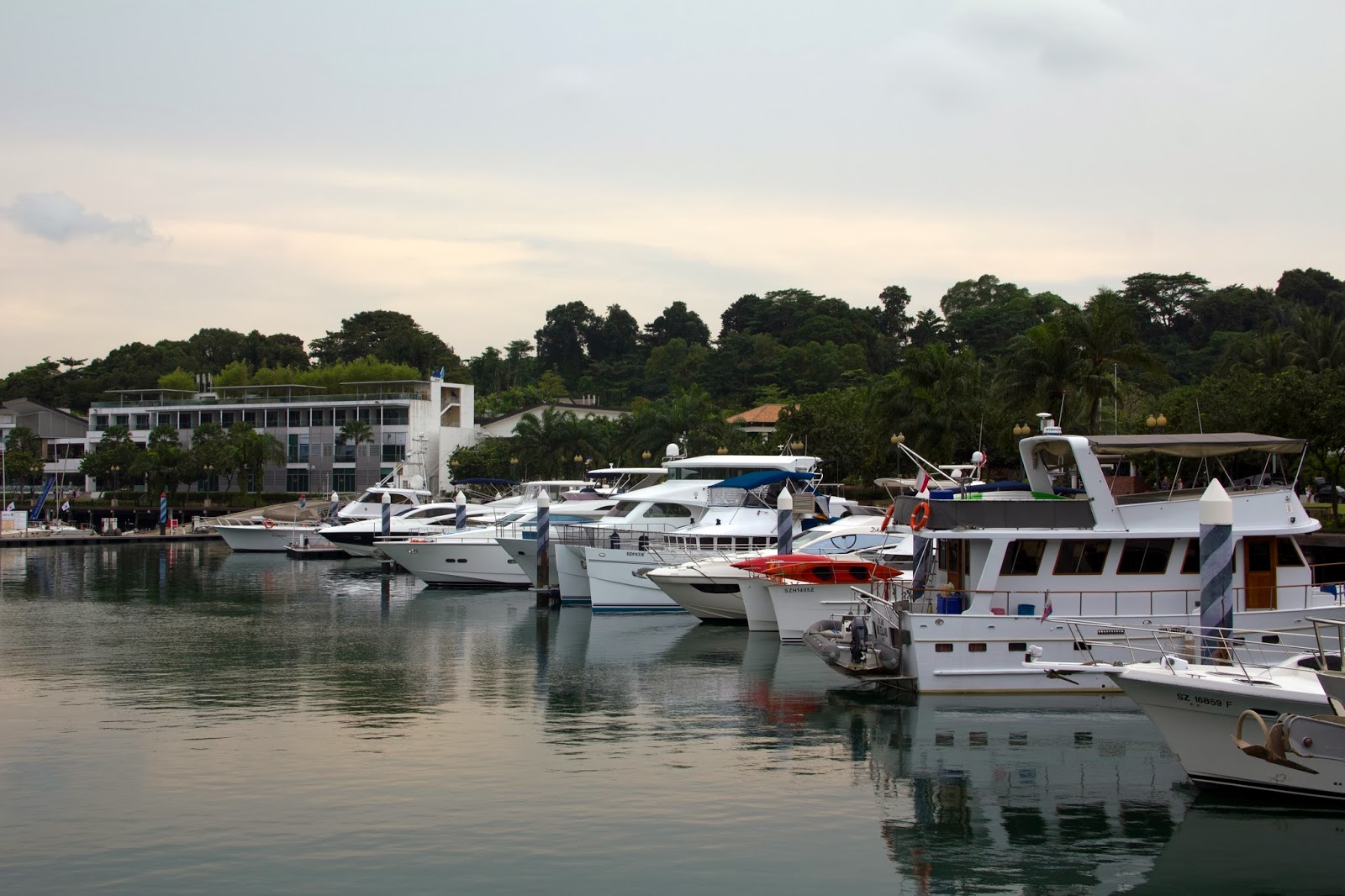